This Is A Good Book #5: Workplace Management” & “Toyota Production System”

You can read a lot about lean. Or you read less, but the right stuff. 😀

Whoever is into Lean

… can’t help but look at Toyota. Because that is where Lean starts. At least the Lean we usually consider today.

Taiichi Ohno shaped Toyota’s corporate culture and organization for decades with his understanding of effective business and his concrete ideas for organizing mass production. It had to be maximally profitable, competitive, sustainable, and flexible.

How are processes designed to interact as efficiently AND effectively as possible? Some of Toyota’s answers are as famous as they are legendary: Just-in-Time, Kanban, and “Automation with a human touch”.

“Just because somebody is moving does not mean he is working.” (Taiichi Ohno)

The books “Toyota Production System” and “Workplace Management” explain Taiichi Ohno’s philosophy, his principles, and also how they evolved and were put into practice. Also what this means for the organization and its culture. 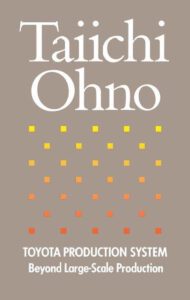 … will collapse under the weight of extensive Lean literature? Be reassured: Taiichi Ohno assumed (probably rightly) that busy managers only read short and comprehensible books. Accordingly, he wrote his books in a “manager-friendly” way. This still works to our advantage today, the books are quickly absorbed.

However, it is worth reading them again and again. Each time you read them, you can discover a new component of the Lean approach that was previously not understood or only half-understood. And: the approaches are still incredibly up-to-date today and seem very modern.

… come as quite a surprise. After all, the basic ideas were developed in the middle of the last century. Both books found their way into the Western management world in English in the 1980s. It is astonishing that they did not spread more quickly.

(If you’re wondering why that is, read this: Bob Emiliani: The Triumph of Classical Management Over Lean Management. How Tradition Prevails and what to Do about it.)

So if you want to understand the source code of Sutherland/Schwaber’s Scrum and Anderson’s Kanban and understand what’s behind them: it all starts with Taiichi Ohno.

“Improving efficiency makes sense only when it is tied to cost reduction.” (Taiichi Ohno)

(Did I mention that Taiichi Ohno’s books are worth reading over and over again?)

There Is More to Agile Than Methodology